Sanders and Jackson outshine others in their field due to their extensive educational background, numerous awards and recognitions, and career longevity. An award-winning team with over 20 years of combined experience in real estate, Sanders and Jackson are recognized by the Washingtonian as "Best Agents" and the Washington Post as "Top Producers." Today, they serve buyers and sellers of historic, notable, and new construction properties throughout Washington, D.C., Maryland, and Virginia.

Our market has been very hot and has not been impacted by Trump's tax reform like you would expect. That's because Washington, D.C. is a hub for government, and there are constantly people coming and going, so the market is always buzzing.

When asked why he decided to pursue a career in real estate, Sanders said:

"I was passionate about being in an ever-changing, dynamic industry where I could work with people on a daily basis. Real estate provided the best outlet for that."

“I started buying West Virginia properties right out of college and became fascinated with real estate. When I moved to D.C., I sold all of my investments and went full force into residential sales.”

Since 2007, Sanders and Jackson have consistently sold over $100 million per year. Today, Sanders’ extensive background in marketing from his insurance days, combined with Jackson’s strong analytical skills as a former financial planner, ensure that buyers and sellers receive the ultimate experience at any price level. The two are dedicated to building relationships based on trust, and take great pride in using all of their resources to help clients achieve their real estate goals.

As thought leaders in their field, Sanders and Jackson stay abreast of prevailing trends in their local real estate market. In particular, they noted that while many areas have seen a slow down since the tax reform, there has not been an impact in the downtown Washington, D.C., area:

"Our market has been very hot and has not been impacted by Trump’s tax reform like you would expect. That's because Washington, D.C. is a hub for government, and there are constantly people coming and going, so the market is always buzzing."

Influential members of their community, Sanders and Jackson are committed to giving back to the area where they live and work. Among many non-profits, they are strong supporters of the St. Jude Children’s Research Hospital, Capitol Hill Day School, and BRAWS.

Noticed© has written this news release with approval and/or contributions from Rob Sanders and Brent Jackson. Noticed is an invitation-only reputation management service that is dedicated to helping professionals stand out, network, and gain a competitive edge. Noticed selects a limited number of professionals based on their individual recognitions and history of personal excellence. 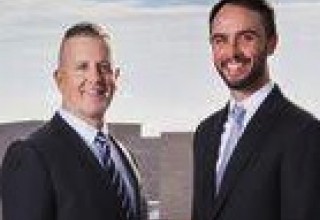