BOSTON, May 23, 2018 (Newswire.com) - Johanna M. Herrero, Esq., Founder & Managing Partner, Law Offices of Johanna Herrero, LLC, has joined Noticed©, an invitation-only service for distinguished professionals. Herrero has been chosen as a Distinguished Lawyer™ based on peer reviews and ratings, dozens of recognitions, and accomplishments achieved throughout her career.

Herrero outshines others in her field due to her extensive educational background, numerous awards and recognitions, and career longevity. After earning her B.S. from John Jay College of Criminal Justice, she went on to the Massachusetts School of Law where she served as an intern for an immigration attorney in downtown Boston, and then served as a staff attorney for another firm in East Boston.

I'm just taking it day-by-day, because no one really knows what's going to happen—one day you have DACA for these dreamers and the next day it's gone.

Named to Super Lawyers® for each of the past three years, Herrero brings a wealth of knowledge to her industry, and, in particular to her area of specialization, immigration law. When asked why she decided to pursue a career in law, Herrero said:

"I came to the United States when I was three years old and eventually overstayed my visa, so I was not legal until my parents received their green cards. I was lucky enough to get citizenship through my parents, but unfortunately, many of my friends in New York were deported and at that young age I couldn’t understand why. As a grew older, I started to realize why my friends were sent away and I decided to dedicate my life to helping other immigrants in the same situation."

Herrero is the founder and managing partner of the Law Offices of Johanna Herrero where she is committed to providing compassionate and skillful legal service to immigrants throughout Massachusetts, Rhode Island, New Hampshire, Miami, Connecticut, and Florida. A large part of her practice consists of removal defense for illegal immigrants, helping asylum seekers and domestic violence victims through U and VAWA visas, and representing legal immigrants who have been convicted of complex crimes.

As a thought leader in her field, Herrero is continually monitoring the latest developments that may affect her clients. To keep them in the know, she updates her Facebook page several times a day with the most relevant stories and attends quite a few church conferences to deliver “Know Your Rights” seminars. The office also participates in many media outlets such as Univision and Telemundo as well as Caracol Radio and Actualidad Radio. When asked about her approach to the uncertainty of the political climate under the current administration, Herrero stresses the need to remain positive:

"I don’t like to feed into the chaos because if I do, it will frighten my clients. At this point, I’m just taking it day-by-day, because no one really knows what’s going to happen—one day you have DACA for these dreamers and the next day it’s gone. Most of what I’ve been doing is just calming my clients down, giving them my cell phone number, which they have access to 24/7, and providing them with the necessary tools should they be arrested or detained."

Herrero's firm was nominated by its clients as a Top 10 Best Law Firm by American Institute of Legal Counsel for Exceptional and Outstanding Client Service in 2017.

Noticed© has written this news release with approval and/or contributions from Johanna M. Herrero. Noticed is an invitation-only reputation management service that is dedicated to helping professionals stand out, network, and gain a competitive edge. Noticed selects a limited number of professionals based on their individual recognitions and history of personal excellence. 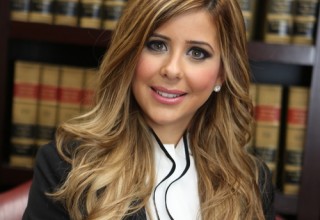